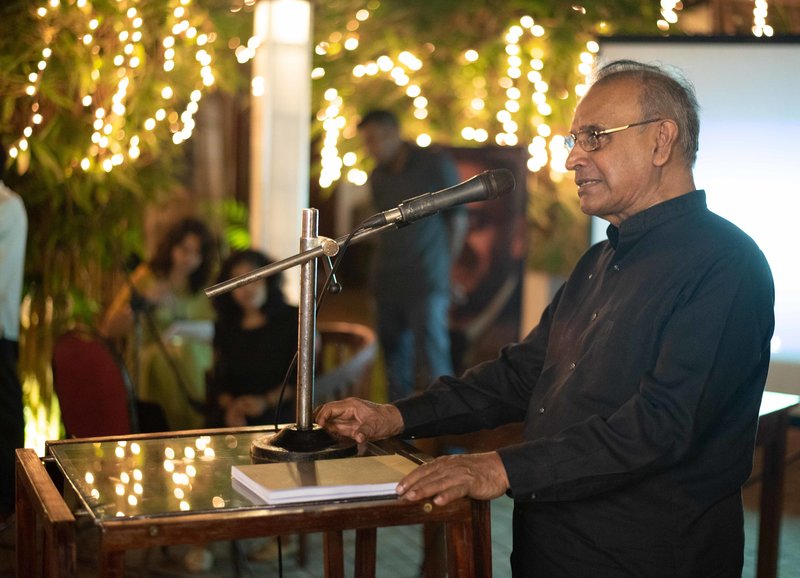 December 15, 2019 saw the launch of a long awaited book sharing the life story of an internationally recognized Sri Lankan personality who was praised by President John F Kennedy, and who represented the island nation at the United Nations. The new volume ‘Sri Lankan Son and Global Diplomat’ unravels illustrious Ambassador Jayantha Dhanapala’s professional career at the United Nations along with interesting anecdotes and insights into his personal life.

Sri Lanka Unites (SLU) is the privileged publisher of ‘Sri Lankan Son and Global Diplomat’ -and this is SLU’s maiden publication as well.

Prashan De Visser, Founder and President of SLU, sharing his thoughts of the Sri Lankan legend and the book itself, says: “Over the past 12 years I have had the incredible honour of being mentored by Ambassador Dhanapala and to closely work with him while he served as the Chair of the Board of Trustees for SLU. I remember in 2009 when the internal war came to a bloody end, we were seeking to expand our efforts as a youth movement for reconciliation and hope. We desperately needed the wisdom and counsel of outstanding Sri Lankans who had ventured ahead of us in the pursuit of an inclusive Sri Lankan identity and had striven to create a just and thriving society for all Sri Lankans. We also needed those who had garnered national and international credibility for their work and character, to boost our own credibility as a movement. Ambassador Dhanapala met all these criteria-and then some! He was truly a legend and to us. No one could represent our nation with such dignity and virtue. We as a young team of passionate, inexperienced, and unknown young professionals with grand dreams of creating a transformation in the nation’s turning point, didn’t even expect a response to our e-mail, let alone the warm encouragement and the willingness to oblige our request to meet him in person.”

“We sat with him as a team and shared our vision of our desire to be the change agent for Sri Lanka using this fledgling movement. He listened intently and earnestly, also sensing our naiveté and idealism but he was never condescending –neither he uttered a single word of discouragement. This has been his demeanour throughout his term as the chair of our Board of Trustees. He speaks clearly and alerts us to the need for caution when needed, and his quiet confidence in us as a new generation of leaders and members of civil society has been one of his strongest blessings to the movement.”

This collection of Ambassador Dhanapala’s speeches unravel a beautiful, inspiring and an impressive tapestry about an incredible personality, who refuses to be limited by the parameters of selfish ambition, seeks to serve for the betterment of others, refuses to be bound to his ethno-religious subculture and strives to serve all Sri Lankans in the same way. Remarkably, he denies to be limited to serve Sri Lanka’s sole needs only, but chooses to serve the world at large. He proves, time and time again, that his breadth of knowledge, insights, and eloquence are ceaseless. Each discourse of him gives the reader a magnificent glimpse into the soul of a man whose authenticity is unmatched, and his perseverance that emerges here is truly inspiring.

From his 17 year old self, writing essays of a greater world, that piqued the interest and lauded him the praise of President John F Kennedy, to his powerful work on disarmament that won him a lifelong friend in UN Secretary-General Kofi Anaan and to his speeches to Sri Lankan youth to lead the nation away from cycles of violence and towards justice and reconciliation, his steadfast commitment to universal-rather than parochial- human values is astounding.

“A few years ago, he said that serving as the Chair of the Board of Trustees of SLU was one of the greatest honors received in his professional life. To us as a movement, being custodians of this book, a collection of his speeches, along with a decade long relationship with this giant of a man has been one of the greatest honors to us too and we are humbled by this privilege. We will work to ensure these words of wisdom and knowledge will reach a new generation of Sri Lankans and global citizens and the impact of these words will echo for generations to come and will inspire new hearts and minds to take on the challenges of yesterday as well as today, just as Ambassador Dhanapala, fearlessly, passionately, and convincingly have been. We as a movement truly stand on the shoulder of this giant and vow to live lives that transform global societies and national realities.”

‘Sri Lankan Son and Global Diplomat’ is now available for purchase at the Sri Lanka Unites Head Office and all Vijitha Yapa Book stores. Readers who would like to have the book delivered to homes are invited to place orders by calling Sri Lanka Unites on 0112 553 057 or 076 854 3347.