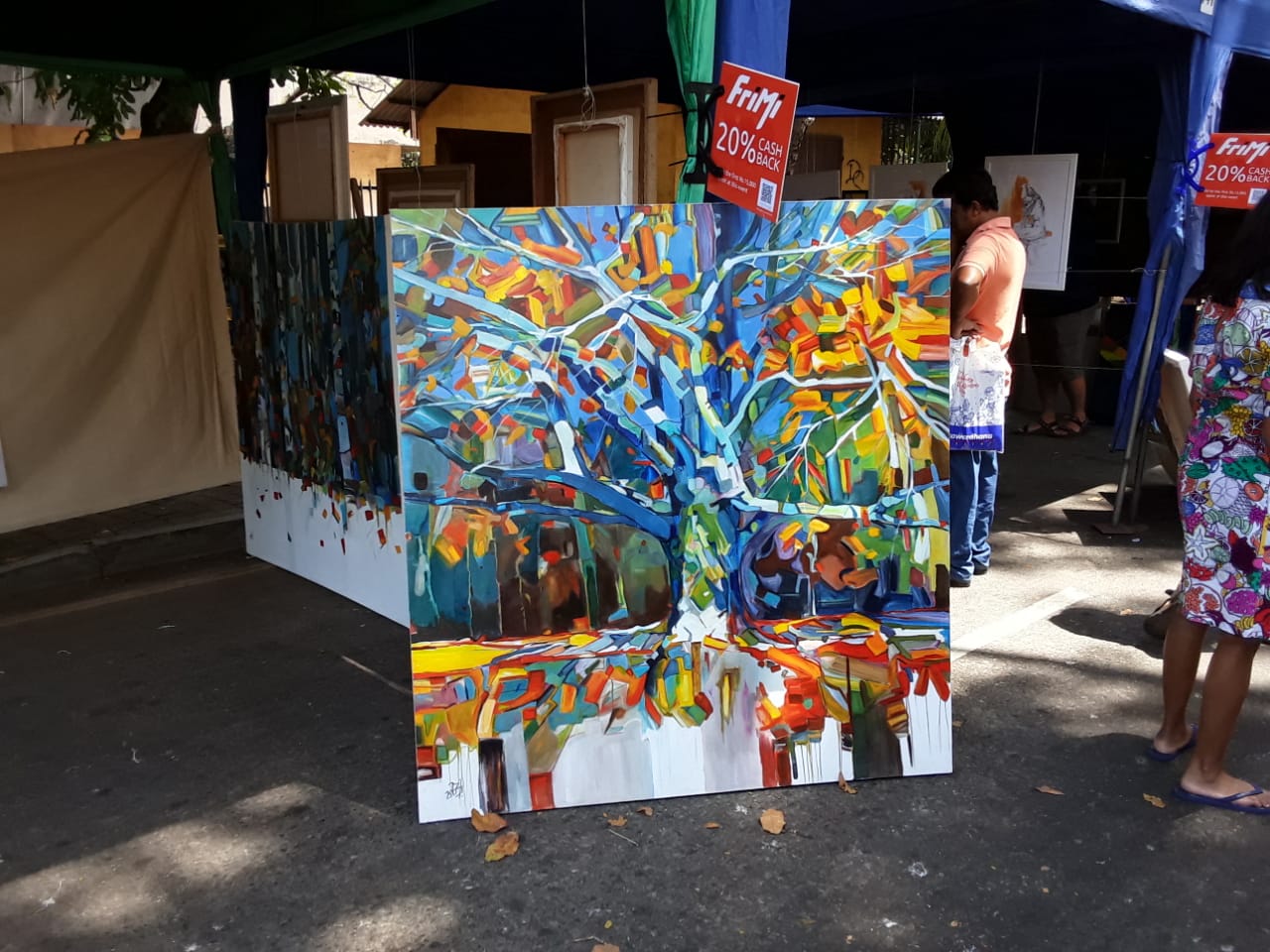 Strokes, colours and curvatures galore! An impression on this year’s Kala Pola.

A kind invitation to this year’s ‘Kala Pola’, sent to me by Ashan Kumar, Managing Director of award winning public relations agency – PR Wire Sri Lanka, turned last Sunday the 23rd into quite a vibrant and colourful day for me! Ananda Coomarsawamy Mawatha in Colombo 07, which is more widely known as the colloquially labelled ‘Green Path’, was awash with a spectrum of shades and shapes giving form to a vivacious spectrum of diverse genres of painting and sculpture, which brought to life the magic of ‘Kala Pola’ as it unfailingly delivers to the delight of art lovers in Sri Lanka each year since its inception.

Organised by John Keells Foundation together with George Keyt Foundation, this year’s Kala Pola was graced by Her Excellency Rita Giuliana Mannella the Italian Ambassador in Sri Lanka as the chief guest at the official ceremony, which took place early evening, that sunny Sunday. A host of dignitaries graced the occasion including some known figures in the sphere of corporate PR and Communications, especially from John Keells Holdings PLC, the proud sponsor of this event.

Among the notable styles and genres visible at this year’s Kala Pola were ‘cubist works’ reflective of a touch of Picasso, as well as works reminiscent of Claude Monet’s impressionistic pieces while there were also many artists who showcased works of a more classical mould. What is interesting to note further is that those styles were adopted to depict appreciably Sri Lankan themes. Portraiture was a very notable form that was opted for showcasing by a number of exhibitors. This genre was quite significantly diverse as there were portraits of the more realism oriented styles to modern strokes with impressionistic curves.

Landscape paintings which are quite popular were prominent themes. Admittedly while there was sterling talent on display, there was mediocrity that was quite noticeably present as well. However this article doesn’t attempt to critique any artist or body of work since the objective of Kala Pola is not for art to be assessed through criticism to enforce hierarchism, but celebrate art as an expression achieved through the labour of the artist’s mind and body.

Among some of the notable exceptions to the general forms, were several stalls with metal sculptures assembled out of what seemed used metal parts, and also frescoes on wood, some being styled on Kandyan temple art themes.

One particular genre that I would like to suggest be more encouraged to be added to the arrays of expression seen at Kala Pola would be, caricatures and comic art forms. Not necessarily political cartoons mounted on frames, but drawings done in that stylistic.

‘Kala’ in Sinhala means ‘arts’ and ‘Pola’ in Sinhala parlance means ‘marketplace’. Kala Pola is thus an event where the artist is given designated market space to capture the eye of art lovers who may seek for a worthy piece to adorn their homes, offices or to present as a special gift to a loved one. A worthy endeavour done annually by the George Keyt Foundation which is supported in this cause by John Keells Foundation, Kala Pola as an annual event is certainly a staple of ‘Colombo’s cultural diary’ and must be applauded for the liveliness it brings to the life of the city.