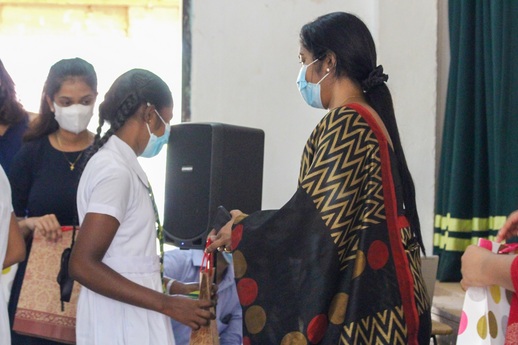 The McLarens Group, one of the country’s leading diversified conglomerates, joined in the global celebration of International Women’s Day 2022, with a series of impactful events bringing together all women across the Group and continuing with its constant care for the communities.

Commencing the series of events, McLarens Group held a social media campaign, proudly featuring the success stories of several female team members. The posts not only showcased their success stories but also offered their thoughts on further empowering all women. McLarens Group also held a social experiment on breaking the bias bringing together participants from different age groups, genders and cultures of which the outcome was that there is zero gender biasness across the Group.

Supporting the local community has always been a part of the Group’s corporate culture. One common problem identified by the Group is that, in many schools there is low attendance of female students during their menstrual cycle. The reason being that they cannot afford to purchase sanitary napkins and the various myths related to it.  As such, the Group rolled out a CSR activity in March’22 at a secondary school in the Kalutara District in line with International Women’s Day. To address the said issue during the menstruation cycle of the students, the Group took measures to donate sanitary napkins adequate for a whole year for the school students and the female teachers. The Group is also looking at continuing this project while closely observing the improvement of attendance of the students.  Additionally, the volunteers of the Group came forward to conduct a one-hour session on health and sanitization, offering basic knowledge on the topic for girls in grade 7 and above and their mothers. They also addressed the dire need to use sustainable (reusable) menstrual products such as cloth napkins and period cups.  This is the first of many series planned.

Furthering its efforts, the Group also launched a project to increase female representation in its Group companies which are considered to be male dominant. Although such cannot be achieved over night, the Group has rolled out a strategic plan to achieve an increase year on year from the current 15% women work-force. The leadership of the Group also initiated several programs to create awareness amongst its Group members on timely topics related to gender parity and empowering women at work. Hans Billimoria from the Grassrooted Trust in Sri Lanka, an organization that works on sexual and reproductive health education, gender-based and intimate partner violence, was the guest speaker at a virtual session organized on the topic of gender roles. An entertainment act was shown to the Group’s members in relevance to the International Women’s Day campaign theme: “Break the Bias”.

The Group accepts, acknowledges and encourages unity by appreciating the vast differences that make them who they are. The Group firmly believes that empowering women to believe in themselves, build confidence through their competencies and be proud of themselves, helps eliminate self-doubt and be self-aware.

McLarens Group portrays commitment to SDG #6 – Clean Water and Sanitization, through the donation of sanitary napkins at a secondary school in the Kalutara District

The McLarens Group is a diversified conglomerate which has firmly established itself across shipping, marine, and logistics, which comprise their core business areas. Years of commitment towards development and growth have firmly anchored the McLarens Group as a diversified conglomerate with specialties in shipping and marine services, logistics, lubricants, oil and gas, bunkering services, automotive distribution, trading, manufacturing, hotel services and property development.